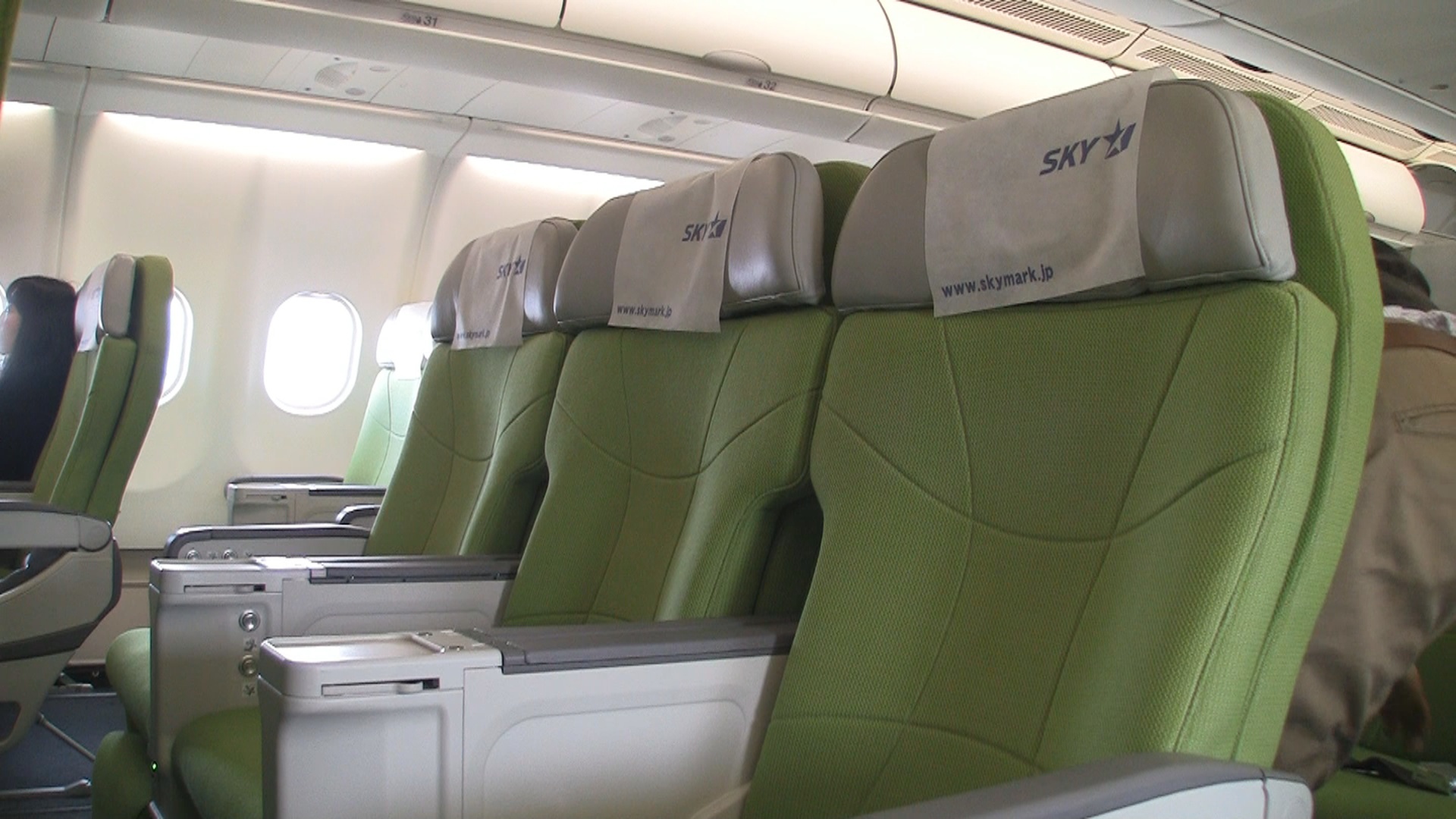 SkyMark A330-300 Premium Economy from modhop on Vimeo.

Unless you’ve got a time-traveling DeLorean you’ll never see the inside of this SkyMark A330-300. While we had hoped to get around to this review early enough for it to be useful, financial realities have stung the airline forcing them away from what seemed to most of us as an overly ambitious plan to take on rival  Japanese carriers. So here, for nostalgia’s sake, is our review of the all-premium-economy SkyMark Airlines A330-300…

Seats(s): These light green seats were short-lived but I can imagine they’d look pretty nasty after a few years of in-flight wear and tear. For the time being they brightened up this all premium economy cabin giving it a fresh feel…err, a fresh lime feel.

The premium-wide center armrests  and seat width made it for us. We enjoyed plenty of elbow room and a separate pull-out drink shelf for resting our purchased beverage on. Hip space was a plus too with a full 22″ of wiggle room.

Legroom was just as generous, particularly here in the exit row on the aisle. While all seats came with a minimum 38″ of seat pitch, here you’d have limitless stretch (save the occasional long-legged Dr. Seuss character),  except during takeoff and landing when a flight attendant awkwardly sits across from you in the jump seat.

Tech/Connectivity/Entertainment : Part of SkyMark’s plan to take down other intra-Japan low-cost carriers was to offer complimentary wi-fi on these flights. Big #FAIL…at least on our flight. While the in-flight portal was available with flight time and altitude, the free wi-fi was living up to its price showing us just the spinning wheel of time-suckage.

What DID work were the console embedded power ports. For that, our juice-drained phone was thankful.

Food: SkyMark offers a for-purchase menu of light snacks and beverages. On this hop it became clear that the system is to flag down any flight attendant you could find and tell them what you wanted. We skipped all that but our pals at airlinemeals.net show what appear to be typical options on SkyMark.

Service: To be fair, I had arrived in Japan the day before after an 11 hour flight in JAL First Class but even with a forced, expectation-lowering stay at the Radisson Narita and seat-botched trek aboard JetStar Japan, Flight attendants here seemed simply clueless. The fresh out of high school crew all appeared to be working hard, but we weren’t clear on what. It might be fair to say that boarding and deplaning a large dual aisle plane for a sub 2 hour flight is a task in itself, but once in the air, cabin crew just awkwardly ran up and down the aisles with an unsure about anything look in their eyes.

How we got em’: We booked early and snagged the exit row seat at no extra charge. At time of post you’re able to use Delta SkyMiles to book travel on SkyMark on certain routes within Japan. 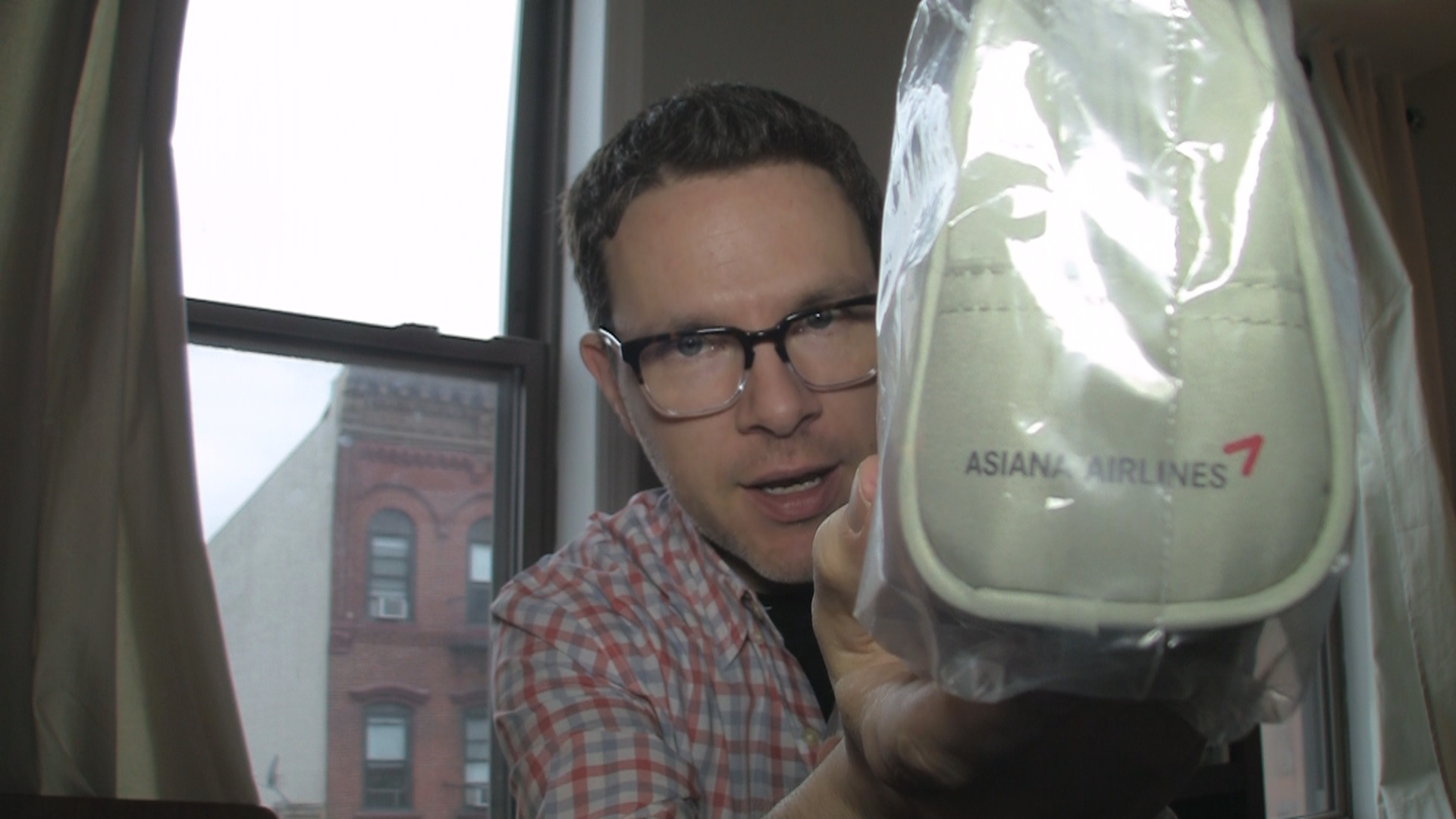 Watch as we dive into an unopened Asiana Business Class (Smartium) amenity kit. Inside we find what’s luxurious and what’s lacking in this goodie bag of in-flight toiletries.