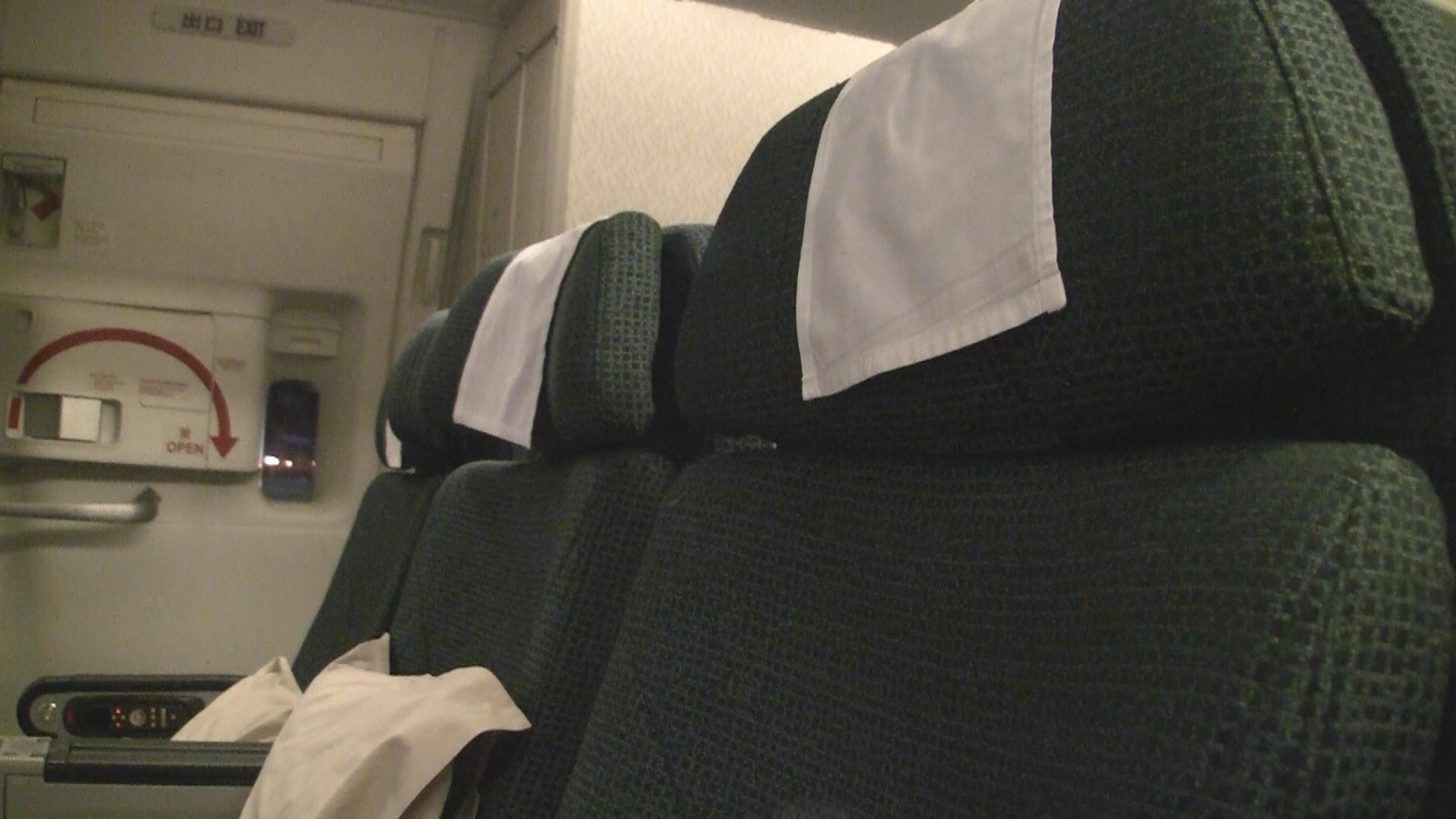 Seat(s): This is much closer to what premium economy should be aboard US airlines…Keep dreaming Modhop. Whether your’e  big or small, it’s width we’re all after as much as legroom so it’s nice to be in a seat that gives us separation from neighbors. We have personal space issues.

Legroom isn’t bad at all here in 30D of Cathay Premium Economy. There’s plenty of space between you and the bulkhead wall so full extension is no problem, but…

There’s one toilet in this cabin and guess where it is?

Just one, on the opposite side of this row that turns this into a traffic lane. It’s not just possible, but likely your toes will get clipped as other Premium Economy passengers on this side of the plane make their way too or from the loo. It’s so totally annoying that I wish the seats were a little closer to the wall.

Tech/Connectivity/Entertainment: Cathay Pacific’s “Studio CX” personal entertainment system features a very good selection of movies and tv programming. The units are a little older than you’ll find on similar aircraft but was ahead of it’s time when the system was installed so it remains competitive where content is concerned…for now.

You can plug into your own full power port attached to your center console. There are USB “trickle” charge ports in seatbacks for other passengers in this cabin but we couldn’t find one in the bulkhead seats. We’re still looking.

Wi-fi wasn’t offered on this flight.

Food: The presentation and selection of food is certainly elevated in Premium Economy. I’m fairly confident the choice further back wasn’t one of duck and lamb. The supporting cast, a small herb chicken salad and the peach yogurt cake desert, however, wouldn’t do much wouldn’t alone convince us that we paid extra.

Service: Service was splendid as it always is when we fly Cathay Pacific. From the seemingly genuine greetings at boariding to the careful explination of meal choices, the crew on our flight met what we’d expect in a premium cabin.

Amenity Kits arent normally offered on these shorter segments between New York (JFK) and Vancouver (YVR) but a very kind flight attendant found some sleep gear like an eyemasks and earplugs. Cathay Premium Economy specific kits like the one we featured in our Amenity Kit unBOX feature are distributed on overnight segments.

Watch, scroll and view our other featured pieces on Cathay Premium Economy Service:

Pic Gallery from this seat, 30D.

How we got em’: We straight up bought these tickets. If the price is right, it’s a fairly good value for the space on this quick jump to Vancouver and look to be great for the longer journey to Hong Kong. 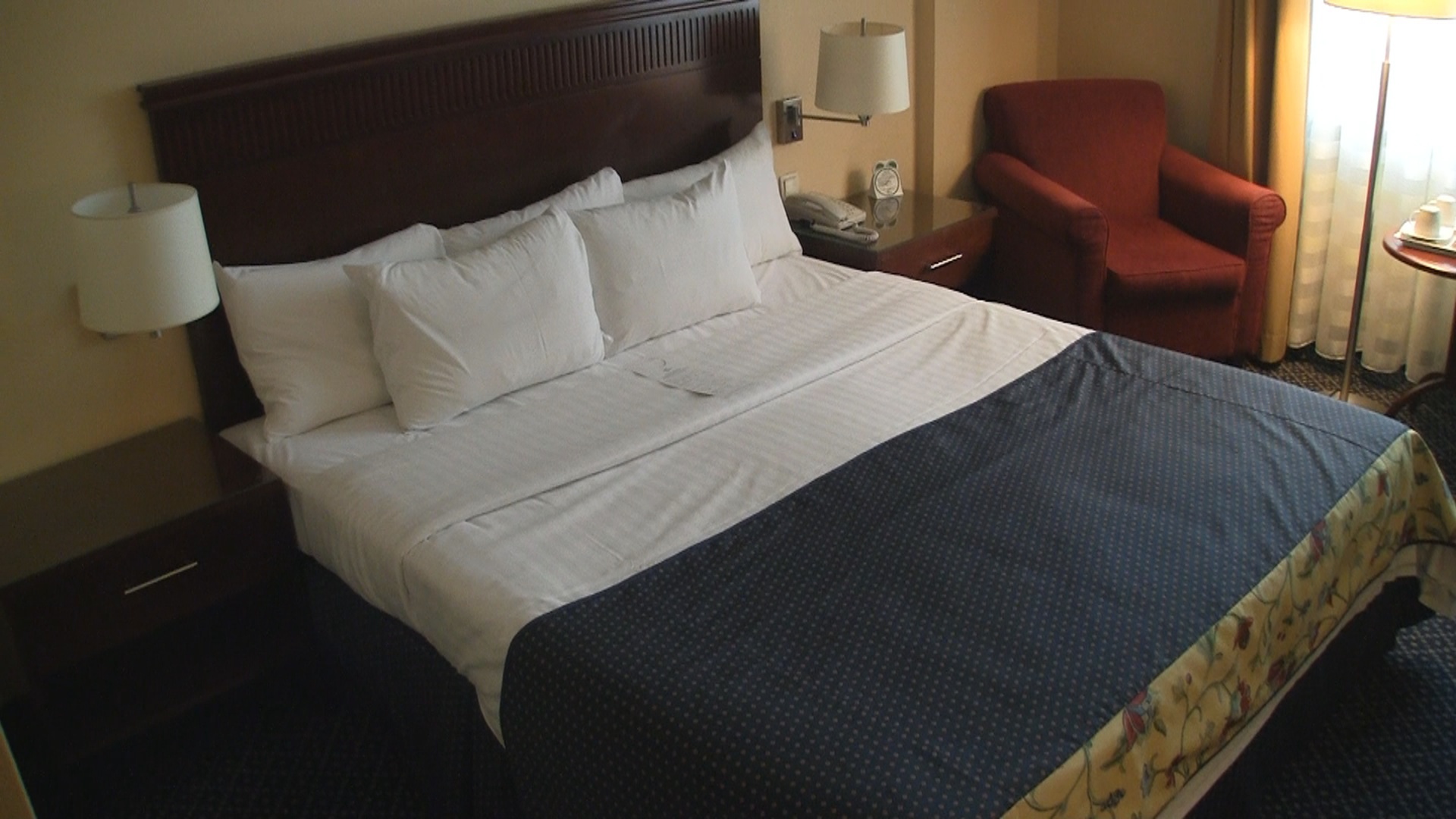 Trans-atlantic turbulance keep you up all night? Well that 6 hour layover at Warsaw Chopin Airport (WAW) won’t have to totally bite with the Courtyard Marriott Warsaw Airport Hotel right […]