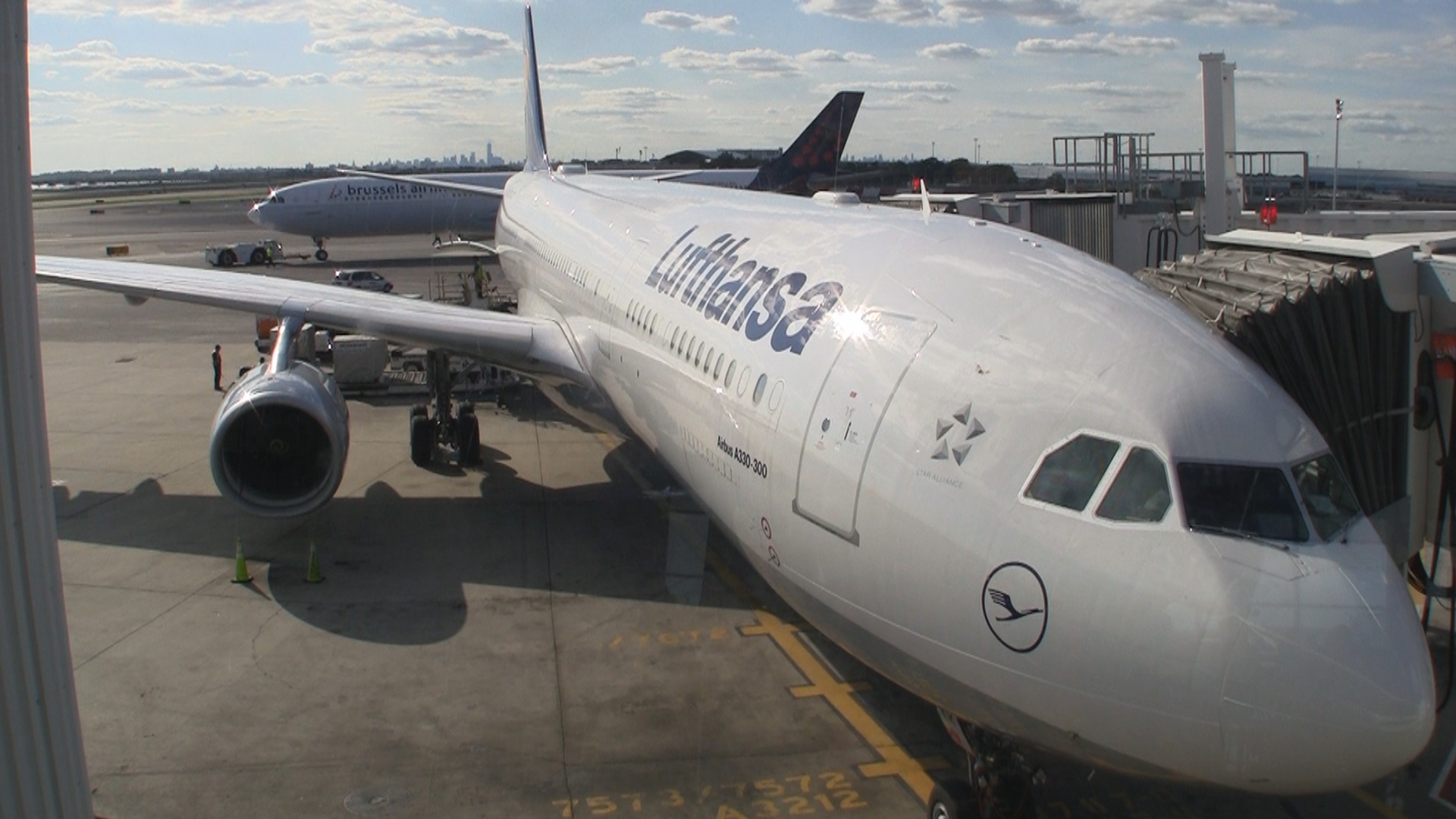 Seat(s): As cots in the sky go, this pair of bulkhead seats aboard a Lufthansa A330-300 business class aren’t entirely bad. I say “entirely” because half the pair is better than the other and “bad” because the lesser of the two has annoying quirks. On the aisle in seat 3H you’re in great shape with a good sized footwell and face forward, unlike the more typical seats in business class that are angled and have footwells that are uncomfortably close to each other. Next door in 3K you still benefit from a more straight-ahead view, but your feet get the shaft (a tiny one). Your footwell has a pesky angle that funnels your feet into a tiny space when you’re lying flat.

Also while flat, you’ll find a few bumpy spots that might make it tough to get comfortable. Fairly adequate cushioning makes this less of a nuisance, though.  Oh, and “flat” means “flat with some curves”. At around the knees your seat dips just a bit toward the footspace but the rest of you stays horizontal so it’s still (for all intents and purposes) “fully-flat”.

Upright, you’ve got great legroom in both seats, but window seat 3K gets cheated again with the curvature of the airplane cutting into your legroom. In non-bulkhead rows this isn’t a problem in window seats because they’re angled away from the window. Putting your seat into the “relax” position is a good solution as it lifts your legs above the ground and is nicely pre-programmed for an angle that’s still conducive to personal TV watching or getting work done.

The really nice thing about these particular seats is that they’re in a section of the business class cabin with just two rows (3 & 4). Located just behind first class and in front of a galley, this mini-cabin is nicely secluded and gives you a greater chance at a more peaceful flight.

Tech/Connectivity: Wi-fi was one of the things I look forward to the most on Lufthansa because the only people who will likely interrupt me in the sky while I work are there to feed me. That’s why it was frustrating when (despite the “hotspot” signage) there was no wi-fi signal available on our fight. If it’s working for you, it’ll be a nice perk. Web-surfing or not, you’ll exit the plane with phones, tablets and laptops fully charged. Standard outlets and USB power ports are found at every seat.

Food: My memory is hazy but in checking my notes I seem to have wanted to make the point that both the appetizer and main course were simply “less than robust” and the desert “economy sized”. From that you’d gather that I was unhappy with the portions but instead was actually pleased that I wasn’t overstuffed with larger than necessary portions. Flavor varied from course to course. The shrimp appetizer was a nice start but the beef & potatoes main dish lacked flavor and the curiously red-glazed key lime pie desert was small and unmemorable.

Pre-arrival breakfast was the highlight food-wise. A nice but small selection of meats and cheeses was served alongside yogurt and fresh fruit. A nice, light food finale to this trans-Atlantic flight.

Service: Flight attendants were cordial and didn’t miss a beat when it came to meal time. Even when food-time was over the crew was seen in and around the cabin in case they were needed.

How we got em’: This was part of a larger itinerary using US Airways miles. Our friends at PointsPros found a great multi-segment all-business class trip using minimal miles to Asia via Europe. 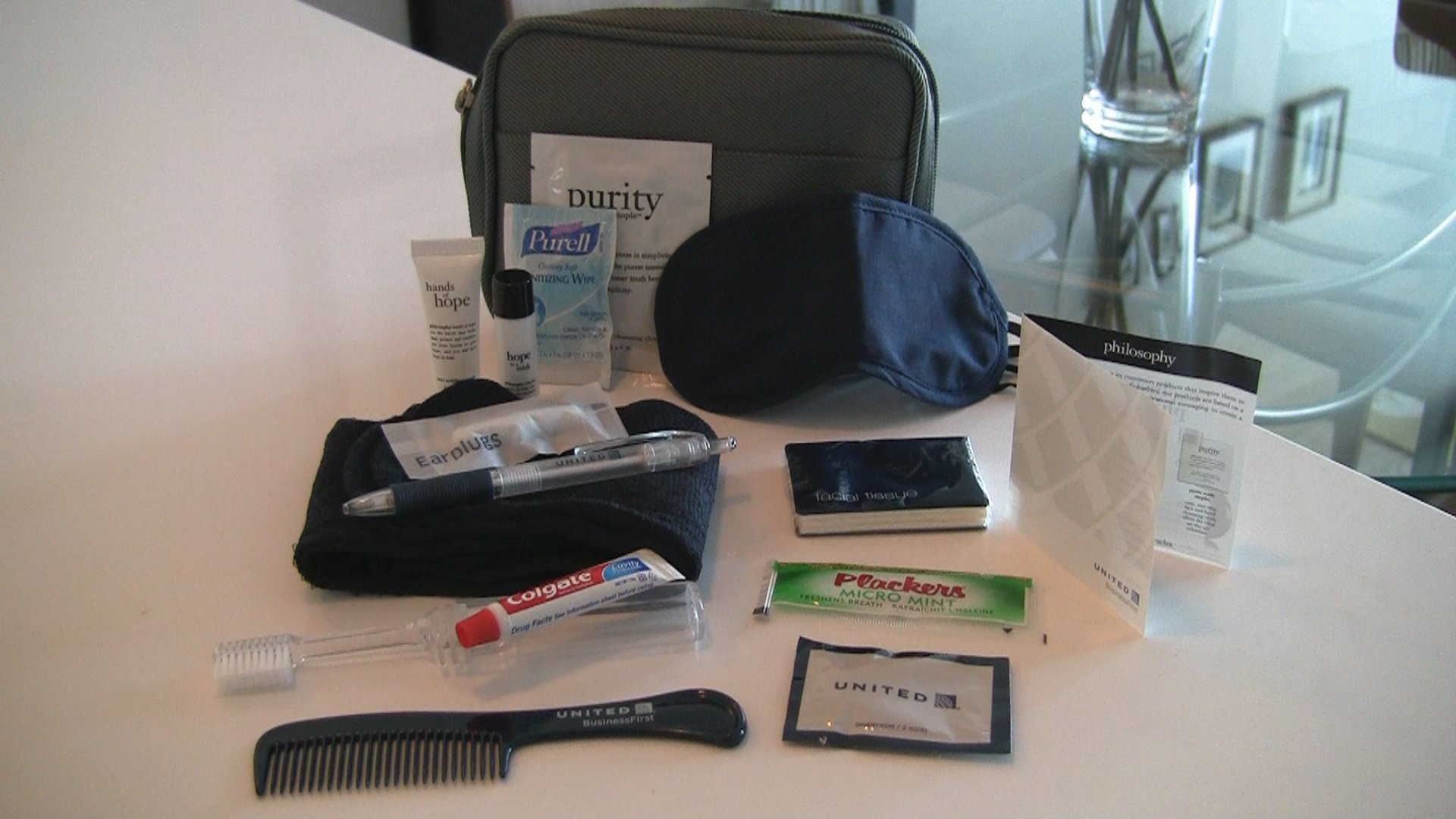 This United Airlines Business First amenity kit has been around for a bit now (introduced late 2011)  so I wouldn’t be completely surprised if it’s gone tomorrow. We know it’s […]